What Is A Tournament?

Basically, every month the top Players and Fleets can participate in a special competition called a Tournament. This is essentially just the old version of the Tournament only with alot more prizes and a new Stars

based scoring system. Not only that, but every year the Top Tournament Winners (aka Getting a high placement every month) will receive a Season Title.

How Is The New Tournament Organized?

Essentially, Torunaments are split into 4 sections by the weeks. This is to provide a break for players from last Torunament and also to make them more competitive.

This is a break period. Nothing matters right now and prizes are being changed to a new set. Take this time to relax a little bit while you can.

Week 2 is when you’re supposed to organize your Fleets and get your last minute preparations down and about. Still, nothing is happening reward wise right now.

This is where you have to battle and win Trophies

for your Fleet. At the end of the third week your Fleet will be placed into 4 Divisions. Inactive Players do not count toward this Qualifying week.

your Fleet has. You can gain Stars for your Fleets by successfully attacking, defending, or revenge attacking other players in the same division. Losing battles won’t make you lose stars, but you are giving the enemy stars via a successful defend.

Stars are calculated like this, a win will give +(x) Amount of Stars, where (x = Enemy Trophy Count Rounded down to the nearest 1,000). We will call this number, the “Star Value”. Note that inactive players from Week 2 can’t gey stars for your Fleet, but they can still be attacked for stars. Also, successful defends will give you stars based on the enemies star value not yours, and Revenge attacks only give half as many stars a normal attack on the enemy would (Decimals round down).

Matchmaking is also altered. Instead of ship level determining what enemies you find, your star value will now determine it. You can fight enemies with -/+2 your Star Value. Along with that, once you attack someone in a fleet, you are stopped from attacking members in that fleet again. This block will stay for 1 Hour. Fleet Division A and B targets also have their failed defense immunity length decreased by 2 Hours.

Lastly, if you leave your Fleet, all stars you have gained for that Fleet will stay with them and not the new Fleet you join. However, any stars you get after that will stay with the new Fleet. Also, being a new player to the Fleet (7 Days After You Join) after the Tournament ends will only allow you a portion of the normal prize your other Fleet Mates got. You also can’t get the Special First Place Division A Prize.

Once all the Stars

are tallied up, Fleets will receive a rank in their division based on how many Stars they achieved. The rewards will be split equally across all active members, and if your Fleet got the Div A #1 Reward, it’ll be given to all active members aswell. Recently joined members will only receive a portion of the split prize and no Div A #1 Reward, and inactive players won’t get any prizes. 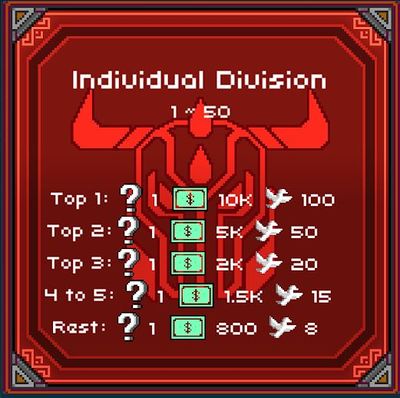 This Division is for individual players and not an entire fleet. Trophies

are used as the point system instead of Stars aswell. Basically, the more Trophies you have, the higher up you will place in this division.

What Is The Season Title?

Star Values per Fleet could be stored monthly and tallied up for a annual title prize. This prize might be yearly so the prize will maybe be incredibly valuable.

when you become eligible for a reward in every Division. These Doves can be used to buy items in the Torunament Shop. This can include rooms, crew, equipment, and other items. Do note that you can also get Doves

What Can I Buy In The Store?