Are you one of those people that get really negative feedback on your ship layout when you post them? Is your ship fighting other ships with lower level facilities  than you? Or do you simply seek advice to improve your ship’s layout? If so, this is the page for you.

This page is dedicated to going through a basic guide on how to improve your ship’s layout. Read thoroughly to get a better understanding of this usually shaded topic.

Room placement is a dificult task for new players. You must place your rooms so that your crew can access each one, but it’s a little more complicated than that.

First, seperate your combat based and other rooms apart. Everything that has those green rectangles next to the room’s name is combat based. Simple, right? 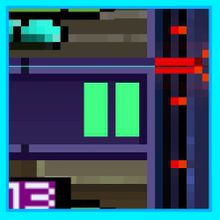 This doesn’t mean putting all the non combat based rooms on a single side of the ship, but don't put them in the way of a crew running to repair his destroyed Mineral Mining Laser.

When setting up combat based rooms, they should be accessible to crew. An awkward layout is still better than inaccessible rooms. Any good player will take advantage of a poor placement choice.

Make sure to place your rooms in way that your lifts will be short as possible for quicker room access for when needed. Especially if you’re in the Qtarian Faction.

You don’t need to make all non combat based rooms accessible at all. Rooms like Gas Collector should be kept out of crew's way.

(See picture) Optimizing micro interactions gives lot's of leeway for space. Knowing where to move Armor will give your crew an upper-hand on your opponents. If your ship has a Command Center, you can program crew to move out of the Gym and Academy even if they are still training, take this into consideration when placing the Gym and Academy rooms alike. 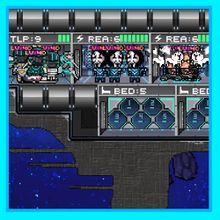 First of all, lets understand how these work.

Lifts will only work if they are at least placed on these areas of the room’s ends: 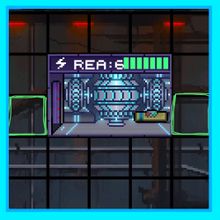 The lift “blocks” you place are just like elevator shafts. When in battle, any upward chain of shafts creates one elevator that can board only one crew at a time. The elevator’s speed moving up and down will be determined based on the level of shaft block it’s currently inside. (Upgrading just one lift won't determine the speed alone)

Upgrading lifts (to the maximum level available currently) is of highest priority above and below lv6, if you want crew to be able to get to different ship levels fast, let alone having them at all. If you are a frigate (lv1-3 ship), one shaft is plenty. But at higher level play (lv5+) two shafts is the usual minimum that allows best access to all rooms without clogging one shaft with crew.

Tip: the primary interaction of lifts above mean you can sneak in an extra armor block above the lift if needed. 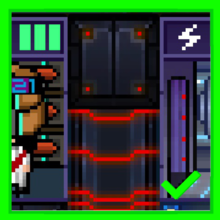 Armor is not something you should not overlook, unless if you’re a frigate (at that stage, armor barely makes a difference). These tips apply towards combat based rooms.

Armor reduces damage done to any room that it’s sides are touching. It has no effect on the entire ship hull’s health, or defense provided equally for every room. Here is an example of where armors will affect the rooms and where they won’t. 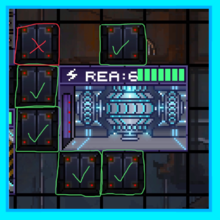 Every time you upgrade an armor block, it will defend the rooms it’s touching more. The defense percentage can be seen here: 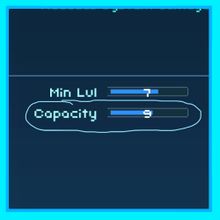 Remember that clicking on a room shows how much the room is being defended in yellow text. The actual algorithm that regards how much damage is reduced is unknown, but it will help nonetheless. Remember that the railgun and javelin missiles completely ignore armor’s effects. 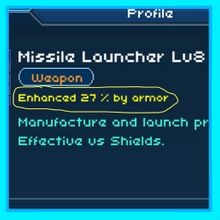 There are some different yet similar armoring tactics to effectively armor your ship. The first one is used by almost every dreadnought and mothership (level 10-11), which is, what the author calls, the “armor belt”

The armor belt strategy is simple; you need a 5 or more block tall grid space, and you put rooms on the bottom, an armor strip down the middle, and more rooms on the top. It looks like this: 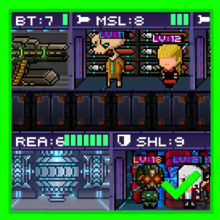 Armor belt is extremely effective since, as long as your ship is a longer type, guarantees effective and not horribly unequal armoring towards rooms. Armor belt doesn’t need to be a single strip, either. For example, qtarians (especially the ones that are level 7+) can add multiple layers of armor strips to still make the strategy effective.

Vents are sideways, shaftless, elevators that cannot be upgraded. This strategy utilizes that opportunity and puts these between rooms wherever they can. 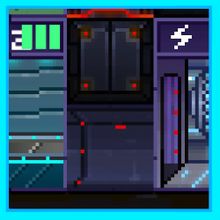 It also uses a little bit of armor strip, but the extra armors on the side provide extra defense as the expense of less space for rooms. The setup can differ in how it’s exactly used, but here is roughly what it looks like. 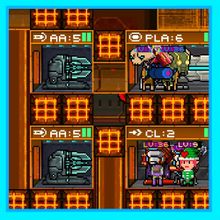 If you've hit vent capacity, putting an elevator shaft instead of the vent will work (almost) just as well (it won't need to be upgraded, either)

Remember that these setups are usually difficult to utilize under level 4, and using these tactics shouldn’t be necessary if you’re still a frigate. If you can, though, put the armor corridors shown above where you can, since it will help.

Also, armor smartly. When you’ve set up your armoring and put in your rooms, there will be areas where armor will effect a room more than others. This is just the writer’s suggestion, but these rooms should have more armor tiles touching them.

Higher priority: shield generator/battery, anticraft laser, security gate, engines. Mostly rooms that keep you from getting pounded too much.

Medium priority: your most dependable/powerful weapon rooms, and reactors. Mostly rooms that provide great offense or get targeted often.

Low priority: any other room that makes a good but not great difference in combat.

But most importantly, prioritize the rooms that are most often targeted by the enemy ship. Reactors, for example, get targeted less and less as you move on in the game.

Remember that despite these recommendations, whatever you prioritize the most should be what you armor most. Remember to have at least 1 or 2 armor tiles touching any combat based room.

See an area That’s just 2 blocks tall? Do not put a combat based room in there, since it will be difficult to armor it.

It is completely okay to have tiny areas without blocks in them, but if it’s 2 blocks next to each other, take advantage and move some combat based rooms that way so you have a little more space to work with!

Know that layout building takes time, effort, and a lot of thinking. You will have to dedicate about 20-40 minutes if you want an effective remodel after upgrading or if you’re just remodeling, and this amount of time will slightly increase every time you level up.

Build your layout from a starting point, and be willing to discard your missiles, craft and droids if you want an (almost) complete remodel.

Don’t strictly follow these rules! You are subject to whatever you want, this page just exists if you want to maximize your potential.

Simply post in the comments below! The author (Sup3r87 PSS) will respond within a day or two.